Showing posts from January, 2011
Show All

"I actually find it a bit disturbing" 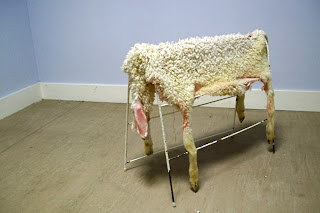 I got a complaint today from a housemate. I live in a care home for old people so there are loads of random rooms. I'd taken one over as a special 'death room' where I could keep rotting corpses lying around without fear of persecution.... I moved it all to the room opposite the swimming pool because there is a much nicer view......but unfortunately the smell got out into the gym and I was discovered! Now me and my lambs are on the run...... I've got one more teeny tiny baby in the freezer waiting to be reborn.
1 comment
Read more

January 27, 2011
People have been asking when D.I.Y Taxidermy III will be.... Well I say spring at the latest. I have soo much great stuff from Dorsecore...just not a venue in London- so if you have one and you want an exhibition and a show in it then let me know. charlietuesdaywinnergates@gmail.com Here is a list of the great stuff I have for stuffing so far: Baby baby lamb Giant pigs head Squirrel Seagull from Brighton Pheasants Goldfish All these things were lawfully obtained by friends and family alike. I have the best friends. Another interesting thing is I have now actually read a book on the subject. Yes I branched out and broadened my horizons. It was good to know that intuition goes a long long way...but also a sturdy background means the foundations won't crack in the future. So now I know more of what I'm actually doing instead of just fumbling round in the dark parts of my mind.
Post a Comment
Read more 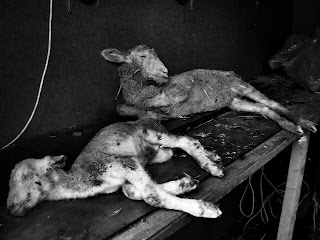 A friend of mine has started work as a 'Lamber'. Basically making sure baby lambs are ok. Lots aren't because they are taken away from their mums at 3 days old. Pretty young but this is usual practice even in 'organic' places. Loads die. Loads and loads- mainly because they are taken away so young or they get special lamb diseases or because they are small and runty. The ones that die get thrown in a giant bin- huge-a massive stinking bin overflowing with baby lives. This giant bin of baby's then gets burnt somewhere secret. These were rescued for me. One is 3 days old and the other just a week. So today I skinned the older one for a future art something. The smaller I have saved for the next live D.I.Y Taxidermy III  It's tummy was all bloated and yuck where it has started to fill with methane gas.That's the smelly stuff. NEVER PEIRCE THE GUT!!!!!  An advert for those animal rights people And here is the lamb without it's body, hu
Post a Comment
Read more 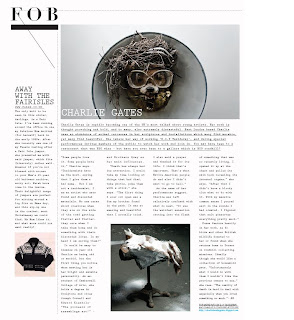 I've got the notion finally  This was page 42 of Notion Magazine from way back in December. A charming young lady to came to Dicing With Death and then wrote this: So that was nice. Bloody hard to read on here.  Full story p42 http://theenvironment.vfolio.co.uk/notion/68/ ---------------------- I finally have a video from D.I.Y Taxidermy II: Dicing With Death ! It's not here - It still needs uploading...but it's hard technically to understand.... I also have footage of the SURREAL NIGHTMARES installation at SHUNT... but that's even more elusive technically. It's all highly technical. It's my own fault for basically not doing things for myself which I should- Which I am. I brought a memory card and everything.
Post a Comment
Read more

Lost Photos from Dicing With Death 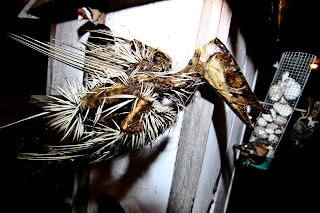 BIRD HOUSE. I rescued the house from my mothers garden then turned it into a center where freakish birds preyed on other birds, catching them with eggs and sparkles, leaving half eaten bird corpse's to fester in various conditions and states of decay. It was about 9ft high. Pretty massive and really heavy. Bursting with bust up birds. Expedition Popular Culture
Post a Comment
Read more 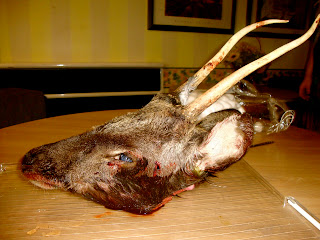 After the Excitement of TIME OUT, Christmas and New year were for resting. I did nothing until I got a message from Angela Watrouse, an American writer in London briefly to research the life and work of Victorian taxidermist Walter Potter. She got in touch wondering if I would be doing any taxidermy before she left for America and wanted to witness/semi-participate as to effectively write about Potter, to get a true sense of the sensory details-smells, the way the animals feel ect. I wasn't planing on doing anything but sticking to my new years resolution I said yes. The only thing I had was the head of a Stag, shot before Christmas and left in my freezer. Bit of a tricky one for a first timer but might as well start at the deep end. The giant bloody head didn't seem to phase her so after a little bit of explaining about where to cut, I let her rip! We cut along the underside of the chin type area and then worked back from there. You can see where the skin and the muscle are
1 comment
Read more
More posts