D.I.Y TAXIDERMY: Where I've come from.

D.I Y Taxidermy was where it all began.... 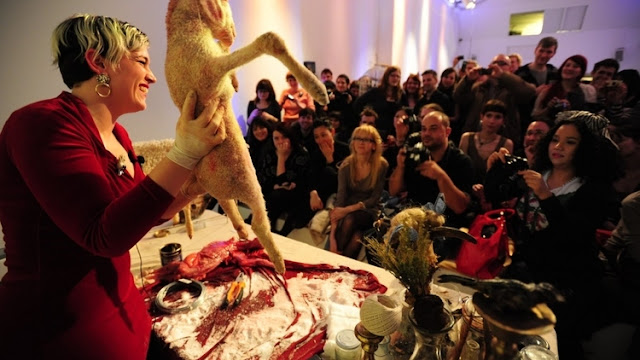 My wild stab in the dark took me on a strange path of live taxidermy performance art, a tongue in cheek exploration of consumerism and our relationship to living things. 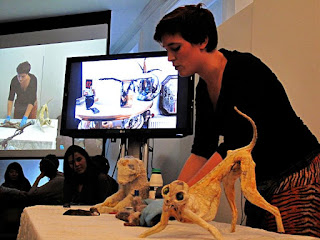 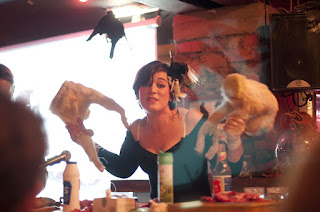 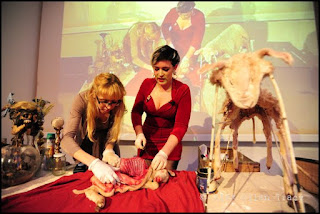 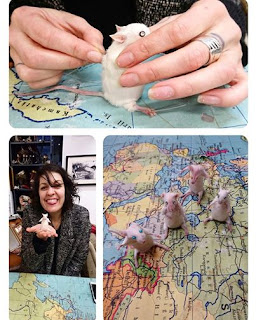 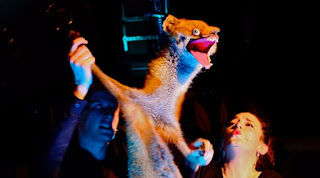 Here is what the early days of my performing career were about and what happened in some of the first D.I.Y Taxidermy sessions.
__________


Live demonstration, performance, exhibition and artist talk all rolled into one.
In about an hour Gates takes an audience through her D.I.Y process (emphasis is heavily on the D.I.Y aspect). Blue Peter meets the shopping channel. She gives you handy hints and tips for using basic everyday objects and materials, where to source animal parts legally & personal preservation methods, giving a unique insight into this seemingly dark art and mind of an artist.

The audience is encouraged to participate and generally be involved in the creation of a new artwork. . Artwork created is then raffled off in the bizarre but hilarious "LIFE! DEATH!PRIZES!'

Now in it's 7th addition. 'D.I.Y Taxidermy' is like no other show on earth.
Bizarre, hilarious  tear jerking, soul aching...a sensory overload of the heart and mind.
After all, life is cheap and apparently meaningless....

….The last D.I.Y was a sell out. It also saw me put up against some hard-core animal rights activist, heavily edited news coverage made sure I was banned in Germany and a campaign of hate removed me from facebook for the 3rd time. Read all about it
HERE 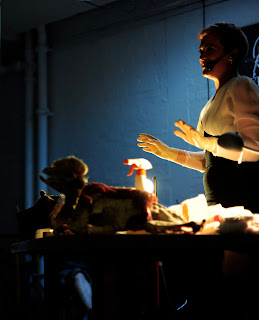 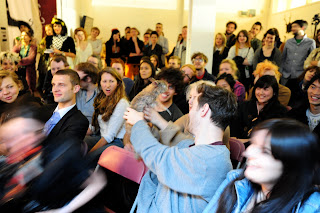 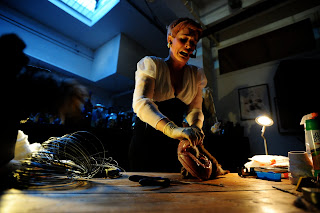 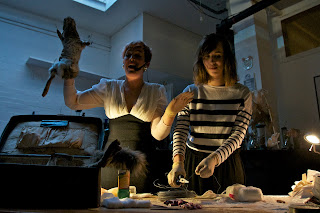 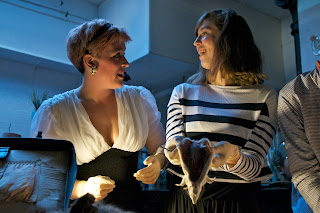 Bringing The Dead To Life
Multimedia piece of the show by Alex Milan Tracy (Takes a while to load)
D.I.Y Taxidermy III: Back From The Dead
The Future Gallery Feb 2011 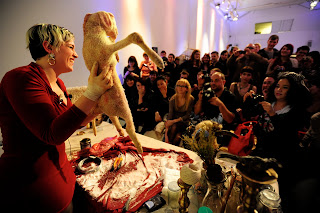 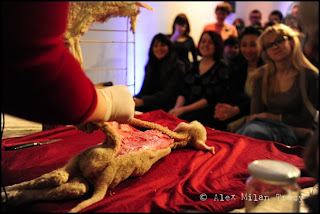 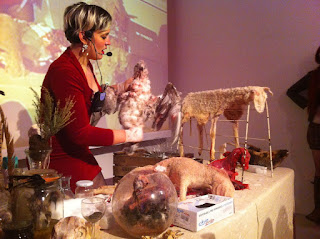 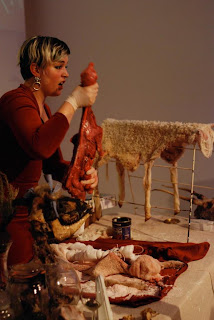 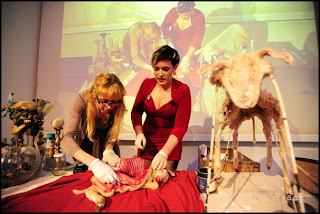 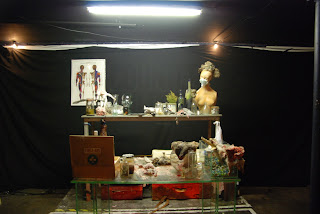 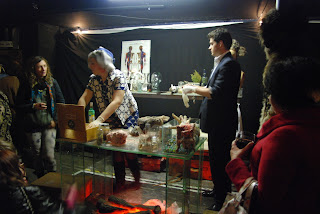 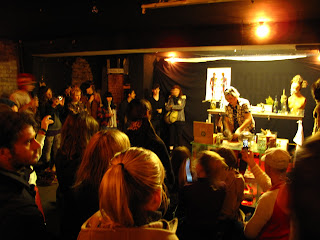 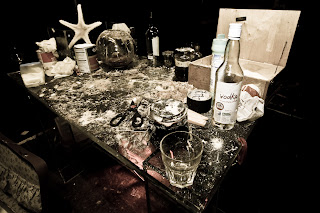 D.I.Y Taxidermy
The Nunnery June 2010
My first D.I.Y Taxidermy LIVE started was when The Bow Arts trust offered me their gallery for a solo show. There was one stipulation - I had to do a performance or have some live music on the opening night. I didn’t have a clue what to do. I’m not a performer, nerves eat me up inside, and music is boring….then lightening struck- I could do Live- D.I.Y Taxidermy! 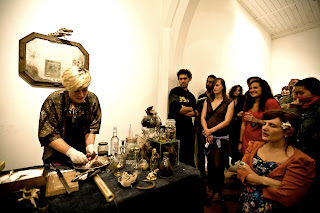 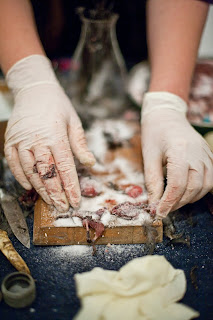 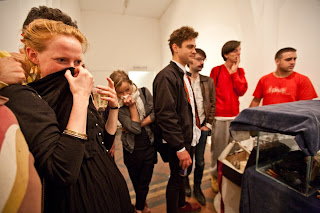 The thought actually turned my stomach a little. Could I really do that live?  I had 0% experience but I was willing to give it a stab. I told myself I would never do it again, that this would be my first and last one off performance. But my new years resolution was to say yes to everything…and 3 months later Counter Culture got whiff of what I had done and suggested I do another solo show with the D.I.Y Taxidermy performance to round it off 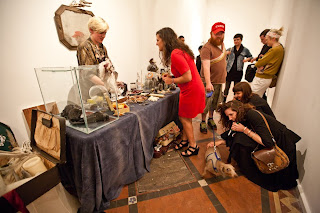 D.I.Y Taxidermy is exploration of my own mind and curiosity....  a personal creative process- just with an audience.

It was born out of a dream to be on the shopping channel and my new years resolution of saying YES to everything(with morals and standards long story, you'll have to ask)
------------------
Being an Artist...you don't have to follow rules...There are no rules. If you are creative, without restriction or intervention-something abstract and interesting will surely happen! I guess Artists are more into experimenting with materials and open to breaking tradition.


Taxidermists have rules. Things look real on purpose. People tell you what to do and how to do it because that is how it's done. However you don’t actually learn anything for yourself, you’re just being told.  Information doesn’t sink in in the same way as real first hand, off the cuff experience.

Fair enough if you don’t know what you're doing and you are looking for a specific result...then you would probably want a proper teacher. . .

When I first started this sort of thing, I knew nothing. I was literally stabbing around in the dark. I didn’t read. I didn’t learn. I just went my own way and worked it out proper basic style. Everything I did was gut instinct.

People are afraid of getting things wrong. They don't have confidence in themselves or their decesions. They need permission, some sort of guidance. . But how do you think anyone learned anything in the first place?!

I believe that if you want to do something and you have the ability, then you should do it (obviously within the law).  If you really really want something, then you will get it.

Everything stays the same if nothing ever changes.
--------------------------------------
All the creatures I have and use are road kill or refuse. I go to these places of horror and save these beautiful things and create something out of their discarded lives. No one cares when it’s on the side of the road getting flatter and flatter, but when its put in your face suddenly there is up roar! Oh, isn’t it terrible what she’s doing! Well, not really. 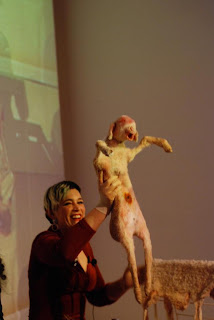 I LOVE animals. I love them! Keep as many of them alive as possible I say! I have cried at the sights I have seen and I say a prayer over the animals that have given their lives for me to do something creative with them. I save things from bins and the side of the road. Creating some bizarre beauty in the lost and forgotten. Preserving the reality of death rather than the illusion of life.