Showing posts from November, 2009
Show All

Today I pickled my first rat 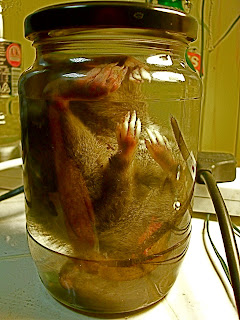 We had what some would call an infestation.  One dark and cold night I awoke to feel the pitter-patter of tiny feet across my pillow. That’s right- my own pillow. I made a move and I felt the bastard run down my leg...................... Jesus, that was it. I had had enough sleepiness nights worrying about when I would get herpes from land sharks.  But no more. I brought about a ton or Rodin and set piles of it about the place then went to sleep. I awoke early and tentatively peered into the bowls, they were empty! So I sat back and gloated at their misfortune, but my  gloat was short lived.  The bubble burst upon hearing that rats have an illness homing device and go to their nests to die- Shit. That means in a month or a week or whenever we're going to have to deal with the smell of rotting diseased bastards ruining are nasal passages with the memory of their vile existence. Erugh.  3 days later I awoke to another beautiful day in paradise. I opened my door and ther
Post a Comment
Read more
More posts