Showing posts from June, 2010
Show All

Photos by James Stroud This Photogrpher asked to do a shoot in my old studio. http://www.james-stroud.co.uk/
1 comment
Read more 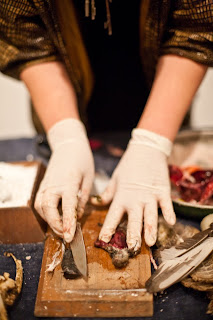 This was my first and last performance entitled 'D.I.Y Taxidermy' When I first conceived the idea of live taxidermy...I felt a little bit weird. Was this right? Was this a good idea? The more I thought about it the easier it was to stomach. I had only ever half skinned a fox before so the thought of skinning animals in front of a live audience was daunting-espically as I had no real clue what I was doing. I decided not to think about it and let the magic happen spontaneously.  The first thing I did was get out the 'pickled rat' (for more information of the rat see a previous blog). This rat had been sitting in it's own bloody vodka juice for well over 6 months. Pulled out by it's tail, I then proceeded to ring it out so all the rat juice dripped away- I then poured shots of blood rat dirt water- no one drunk it.   The rest was more like a D.I.Y cooking show, done in a relaxed style where I would rabbit on about this and that, explaining where and how I came ac
1 comment
Read more
More posts