Showing posts from December, 2010
Show All 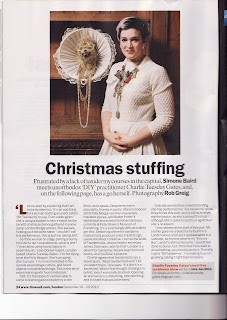 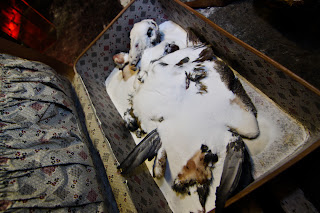 Bonjour Here is a selection of photos from D.I.Y Taxidermy II: Dicing With Death , which have only just come to light. Physical writing about the show & event is a few posts below- It was really dark so picture colour not amazing. Salting the wounds What I keep in my suitcases-never borrow one from me Keep Away From Idiots Look What The Stork Brung! It's clearly funny to draw genitals on children Work space Christine Chambers   A real stinker. Lots of people didn't realize that the skins in this were really fresh and completely untreated.....Thus resulting in the hideous stench of death. Little Bow Peep got eaten by sheep Close up from 'Bird House' A Scientist Fox In The Box Well turned out member of the audience having a stab 'Performance space' If anyone has anymore photos from the event please e-mail them to charlietuesdaywinnergates@gmail.com because I haven't taken any...... Love from Charlie Gates x
Post a Comment
Read more

December 06, 2010
Next show FREAKS Shoreditch Basement Gallery, Shoreditch Town Hall. Thursday 9th Dec  I've been so massively busy. More busy then ever. Had 3 shows back to back in November; D.I.Y TaxidermyII:Dicing With Death at Counter Culture , Surreal Nightmares at Shunt and then Ishihara 14  at the Queen of Hoxton... and I had to move house as well. Full on. Been working on a music video for MOWGLI- That hip-hop rapper dude. Nice guy. I was given a kitchen to dress. They wanted me to create this macabre taxidermists lair, animals and shit lying around. I made the most disgusting set ever. Proper dark with all the weird stuff I love. The camera man said it was the most impressive set he'd ever seen! Pictures soon. Another production studio borrowed some stuff for a film they were doing. Dinner party gone wrong sort of thing, I couldn't be there but apparently it went well..... And the next and most amazing thing is tomorrow I'm going to TIME OUT to do something for thei
2 comments
Read more
More posts