March 30, 2020
I made it to Vietnam- just in time for the shit to hit the fan...and now it looks like I’m here for the show. So I’m relaunching myself as the alternative Asian covid-19 travel blogger... Who doesn’t travel.
I’d been having the time of my life for a week, zooming through the countrys most ballistic attractions at lighting speed, managing to out run the epidemic that hit every tourist spot I’d literally just left. 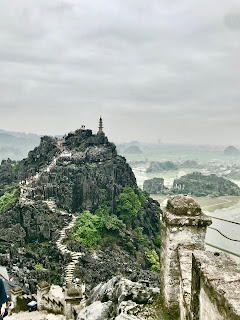 When the country closed its doors, I screeched to a standstill In Phong Nah. The tide had turned. The shit storm was forming in the clouds.
THE SHIT STORM
I was happy sheltering from the storm in my shack on the river, but 2 weeks later I got a series of frantic messages from friends and family. Our thoughtful British government had started bleeting for us to home. “Come back to be miserable and get ill URGENTLY”, they said. “Please leave the safest country you can possibly be in right away” 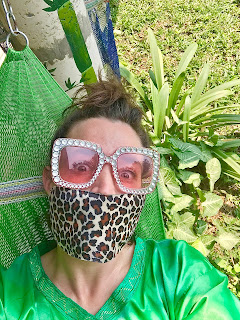 I was perfectly fine in paradise, but for some bizarre reason I got plugged in, charged up and bolted like I’d just been electrified. Only the day before I’d sent my passport off to get my visa extended and now I was about to embark on the most unhelpful rescue mission of my life. 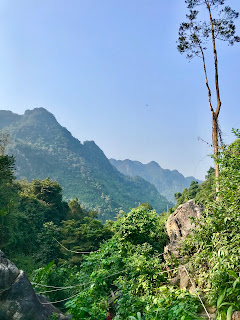 I booked my ticket home for the following morning and zoomed to Danang via taxi extortionation. I crossed the country with my whole body clenched like an anus holding onto the biggest, wettest, most desperate shit of its life. As the epic scenery shot through me, I just had to take the bullet of my new reality. I was leaving Vietnam....

But My passport wasn’t there. In fact it hadn’t even left the town I had come from 7 hours away. I was told to find a room, and as soon as they found where my passport was, they would let me know. Cool.

It’s very hard to get a room without a passport, especially when you have a disease. Luckily the hotel round the corner was practically unmanned, the real receptionist wasn’t there and I waved booking.com at the sit in before being cautiously shown to a room.

The Vietnamese government had made an official announcement saying you had to be nice to stray dogs (tourists). You can’t kick the dog when it’s down, legally you have to toss it a bone.... be it from a very safe distance.

When the real receptionist arrived at the door in her protection costume, there was a lot of confusion. With lots more hand gel and google translate it was resolved and I was left alone to lie awake. It’s hard to sleep when your wired on cortisol. Eventually double doses of diazepam sent me off for 2 weak hours.

My passport turned up half an hour before my flight the next morning. Needless to say I didn’t make it. The next best idea was to fly to Ho Chi Minh asap, but I needed help searching for another ticket home. Things were going crazy online, we’re talking 50hr flights with obscure airlines though unknown lands. All flights offered lovely long layovers and high chances of being stuck with no escape. When friends with genius google powers still found no reliable way out, all I could do was hope that when I got to Ho Chi Minh Airport, I could beg and bribe someone to let me on a plane. It would be just like in the movies, I told myself. 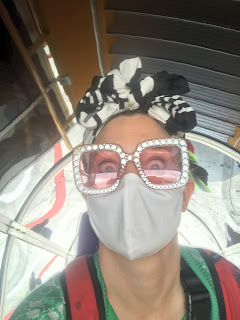 I touched down and ran to International Departures...but it was empty. There were no planes. There were no people to beg. There was no help. The flashing departure boards silently screaming CANCELLED.
Directors cut to cardboard cutouts of airline hosts smiling inanely as a handful of extremely white westerners float through no mans land.
Cut.

Next best idea was the British Embassy. They were the only ones that could save me now. They would have a perfectly polished response team, maybe even a red carpet and big statues of reassuring lions. 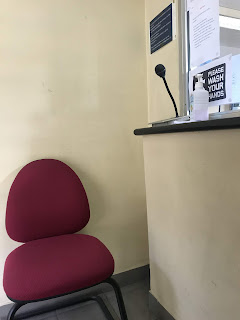 The British Embassy did not have a red carpet, or a response team of polished professionals. Instead I was greeted by a very small, shabby beige room and 3 confused Vietnamese guards. The most impressive thing in the place were the leaflets. Good thick quality paper... That was about it. After filling in a form with my request: ‘HELP ME I NEED TO GET HOME’, I waited for half an hour and was handed a print out which basically said “We are experiencing a huge amount of calls, if you would like to go home, put yourself on this email list by 3pm. PS we don’t know if we will be able to get you a flight. Please keep booking flights through airlines... But they might cancel” Brilliant.

Sending an urgent message for people to get out, displacing them into a city that they can’t actually leave, only to tell them to book more flights and wait near the airport for an indefinite amount of time. FUCK THAT. The Vietnamese are serious about shit. Things snap SHUT. I needed to get out of there and somewhere safe before I was trapped in a city that hated me. 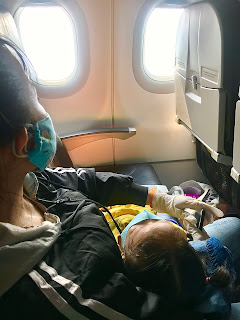 I didn’t wait around. I got a flight back to Danang. Mate, the outfits on the plane were incredible. I can’t even discribe. It was like they were going into a biological war zone. Double face masks, double plastic gloves, rain macs, full body armour of epic proportions. I felt naked and as the only western person in the whole country I had a ring of terror around me. 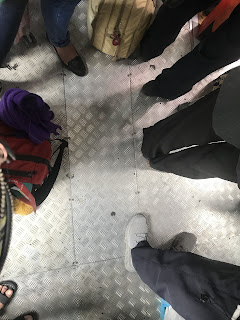 DISEASED DOG
When I landed in Danang things got worse for me. Every hotel I had booked online shunned me. Previously their cash cow, now their curse, I was unable to cross the theasholds for flapping arms and slamming doors. I shouted down the long corridors that they had to help me....The government had explicitly said they had to be nice to me, but silence echoed and all I could feel was the prickly heat of suspicious eyes. Lost on empty streets, I’ve never felt more desperate and alone.

A coffee shop occupied by young, cool, educated hip-hop dudes graciously let me sit in the corner and weep at Facebook. Over the next few hours various online community’s came to my rescue and I managed to secure a room. I cannot thank them enough. Looking over the cityscape that night was chilling. As far as you could see, empty hotels, thousands of dark eyes with only 2 lights blinking in the whole city. I was lucky. Very fucking lucky.

I got word a travel ban was officially coming. Soon no one would take you in, no one would let you out.... If I didn’t make it out of Danang tomorrow I was trapped.

There was one train I could take and got the receptionist to phone 3 times to check I would be allowed. Luckily I was and I arrived an hour early to be sure. 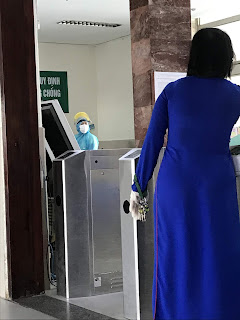 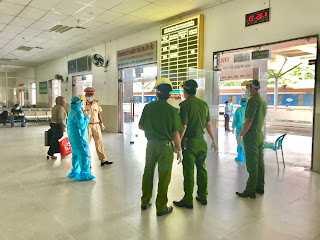 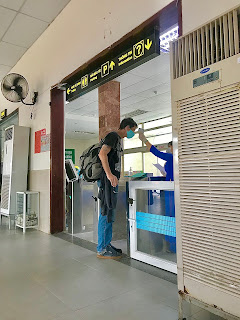 They checked my ever increasing list of travel documents thoroughly, pointed a gun to my head and flapped me through. Watching the police and medical staff in there bio war outfits intercept people off the latest train was scary as hell. I sat in the  waiting room very silent and still. You are the enemy and no one lets you forget it. I got on the train and every 5 minutes a new guard would ask for my documents. Luckily I had proof I was legit, but the only other white dude didn’t... I dont know what happened to him. 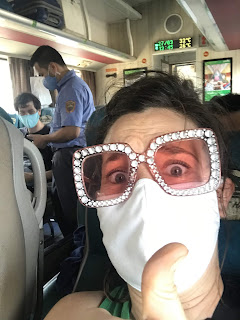 I held my breath the entire time. My sphincter so tight I could swallow myself into the hole. The train journey was epic. Made more so by the fact It was the last one and I was allowed to take it. 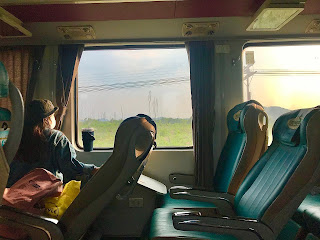 SAFTEY
The Phong Nha sign hung as bright in the sky as Hollywood’s but much more beautiful. I was nearly back to the place I should never have left. Back to my prison in paradise.

Currently I have a sweet ass place on the lake. And I have Wilson- My friend I saved from the river.  We shall see how the trip of a lifetime turns out. Could be a very long story. Stay safe. 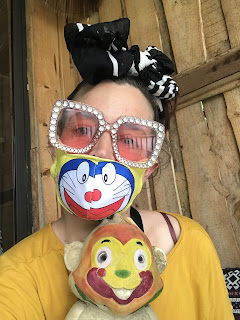