Burn baby BURN! The melt down.

February 10, 2019
After years in the shadows I'm slowly creeping intoithe light. My new years' resolution is to have a Christmas number one. It’s only February so there’s loads of time.

This childhood dream was re-realized in a charity shop during an encounter with a casio keyboard. It had so many beats it could bring you and all your dreams back to life. I bought it instantly, and last week I secretly performed for the first time in years. Me, a guitar I couldn't play and a weird baby sang this original cult classic-  WITCH BABY and Bar Wotever at The Vauxhall Tavern were very nice to let me do so.  I've no doubt I'll be headlining the alternative Pride 2019

This was more remarkable because last year, due to monumental sadness, I had completely lost the ability to sing at all: 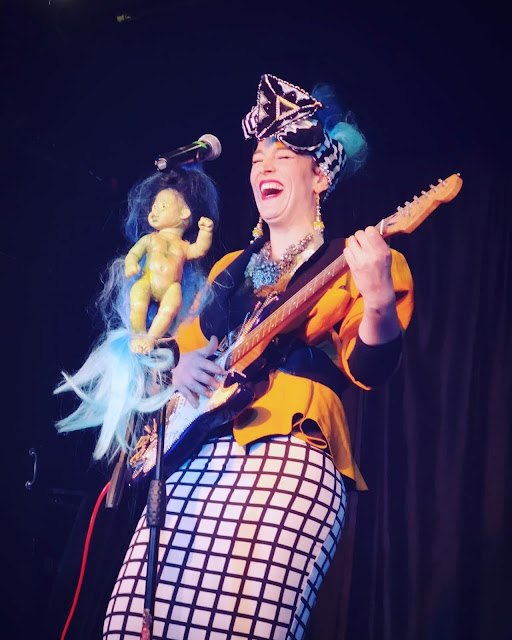 Ever since I was a peculiar little girl, I’ve written peculiar songs. ‘Nigel The Super Cow’ was my first great song, Test Tube Baby came next- These were not a success on the local youth club scene and I nearly got in a fight because cool kids didn’t understand or appreciate things that were different. They didn’t understand that singing about super cows was in fact probably the coolest thing you can do.


My dreams of having a Christmas number one hit were ignited even earlier when I won a school competition for best Christmas song. It was played in assembly and I hid in the toilets every lunch break for a week. I was the new kid, incredibly shy and bullied ferociously in my last school, I was trying desperately to not let it happen in this one and hiding seemed like the best chance of survival. Nothing bad happened and I got a letter saying my amazing song had been entered into the regional final-  I was to perform it live to all the other schools in the area! This was HUGE for a 12yr old.

The regional finals were full of talent from the county, but pretty soon I realized none of them were singing Christmas songs. Worse than that, my last school bully was there in her cool band ... And here I was, shaking with nerves, about to sing my special Christmas song about Jesus, in July.

Needless to say, I fooked it quite spectacularly.

Despite these knocks, singing in secret has always brought me joy, but last year, due to monumental sadness, I completely lost the ability to sing. I couldn’t pitch, couldn’t hold a tune, couldn’t even hum along to something without sounding off. I thought I was losing my most basic neural functions and I was very scared and very very sad.

Back in October, I took myself off to the wilderness to find some sort of peace. With nothing to do but make very dangerous fires in a pine forest, I spent a month burning pain, pain, and pine needles.  I reluctantly picked up a guitar and spent all the other time twiddling my thumbs, before the month was out I’d written my first song in years. I decided that I would be a singer after all.
----
So the last you heard, in the throes of madness, I was selling all my material possessions and running away to Portugal to become a wild woman. Removing myself from my friends, family and support network at a time when I probably needed them most to live with randoms on a hill in the middle of the Portuguese wilderness, was a strange choice, but I wanted to be around people who didn’t know me or my struggles.